I remember the Hubble Space Telescope Advent Calendar a little late every year, but I do remember it. Head over to The Atlantic to see a photo from Hubble every day and get some good perspective. 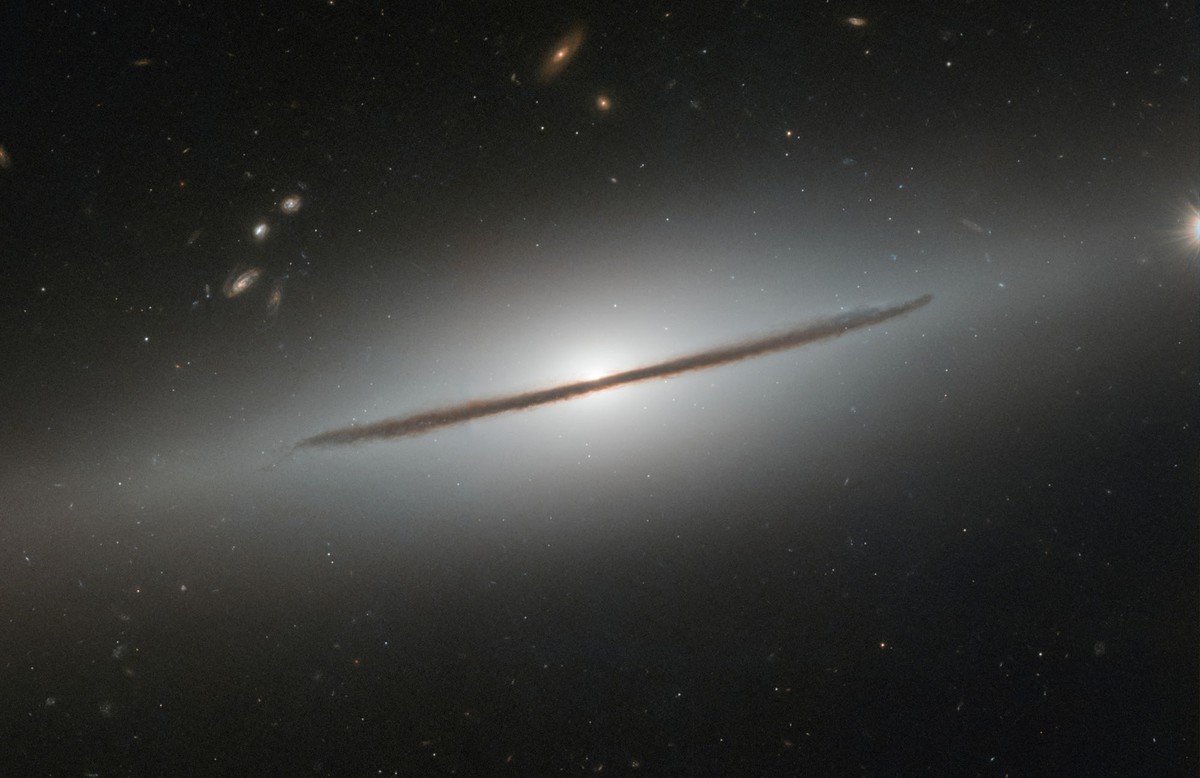 “This galaxy, known as NGC 1032, is located about a hundred million light years away in the constellation Cetus. This view is looking right at the edge of what is actually a spectacular spiral galaxy, with a broad disc of gas and dust dimming some of the light of its many stars along the middle.” Rocket summer. The words passed among the people in the open, airing houses. Rocket summer. The warm desert air changing the frost patterns on the windows, erasing the art work. The skis and sleds suddenly useless. The snow, falling from the cold sky upon the town, turned to a hot rain before it touched the ground.

Rocket summer. People leaned from their dripping porches and watched the reddening sky.

The rocket lay on the launching field, blowing out pink clouds of fire and oven heat. The rocket stood in the cold winter morning, making summer with every breath of its mighty exhausts. The rocket made climates, and summer lay for a brief moment upon the land….

(Quote from Bradbury’s The Martian Chronicles, from the opening vignette “Rocket Summer,” set in February 2030; image from Space News. If you didn’t see the Falcon Heavy launch yesterday, go watch it. Incredible.)

…the 2016 Hubble Space Telescope Advent Calendar is up over at The Atlantic. Talk about perspective–each one of the points of light below is a galaxy. To quote this song, “It’s a great big universe and we’re all really puny.” Have you been following the news about New Horizons? Nine years ago we launched a craft that traveled 3 billion miles to get to Pluto–and it arrived within 72 seconds of its predicted time.  Not only that, it’s sending back pictures (over a 4.5 hour delay due to the sheer distance) like this:

Meanwhile, back at Earth, this is what the New Horizons team looked like seeing some of the images for the first time:

I think we all had a look close to that–a nice mix of awe and “holy shit, it worked!”  Well done, humanity!

In a world of news that continues to be depressing, finding a story about “the most detailed map yet of our place in the universe” provided some needed perspective.

As the article says:

In a fascinating new study for Nature, a team of scientists mapped thousands of galaxies in our immediate vicinity, and discovered that the Milky Way is part of a jaw-droppingly massive “supercluster” of galaxies that they named Laniakea.

This structure is much, much, much bigger than astronomers had previously realized. Laniakea contains more than 100,000 galaxies, stretches 500 million light years across, and looks something like this (the Milky Way is just a speck located on one of its fringes on the right): And, it turns out, that the Lanaikea (Hawaiian for “immense heavens”) supercluster is just part of MORE superclusters that make up the universe. Superclusters of galaxies, each galaxy with millions of stars… mind blowing.

Maybe we all need to listen to Sagan’s “Pale Blue Dot” again? Come on, humanity.

If it’s December, it’s time for the Hubble Space Telescope Advent Calendar: a new picture from the Hubble Telescope posted every day until Christmas. It’s one of my favorite parts of the year. I’m sure you’ve heard, but humans landed a probe on a comet yesterday for the first time. The probe and its “mothership,” Philae and Rosetta, took ten years to travel the 300 million miles to the comet and then had to spend time orbiting it to find a good place for Philae to land. (You can watch a really charming video about the lead up to the landing here–I can’t embed it but it’s really worth a click.)

Philae’s harpoons to keep it anchored to the comet failed to deploy, which is a concern since tere’s hardly any gravity on the comet, but still: We have a scientific probe on a comet about the size of a mountain that is 300 million miles away. I think this xkcd comic sums it up: The more stressed I get, the more I feel like it’s me against the world. Good thing I remembered that I think about space at times like this, and good thing Neil Tyson has reminded me that “we are all connected–to each other biologically, to the earth chemically and to the rest of the universe atomically.”

(The Most Astounding Fact from Max Schlickenmeyer on Vimeo.)

It’s time for my favorite part of December : The Hubble Space Telescope Advent Calendar. Count down to the 25th with a new picture every day and be mind-boggled. “Science is not only compatible with spirituality; it is a profound source of spirituality. When we recognize our place in an immensity of light‐years and in the passage of ages, when we grasp the intricacy, beauty, and subtlety of life, then that soaring feeling, that sense of elation and humility combined, is surely spiritual. […] The notion that science and spirituality are somehow mutually exclusive does a disservice to both.”

(by Dr. Sagan, my science boyfriend, in The Demon-Haunted World)