1. There is a mass of something metallic in an impact crater on the Moon?! Cue the Transformers (or Armageddon) movie jokes.

2. Via Kottke, who was appreciating the manners of Keanu Reeves, I learned about “manner hands” in South Korea, aka not actually touching someone in photos, just hovering your hands above them. Manner hands for everyone!

3. Scanned pages of a French “how to draw animals” book (via Austin Kleon). Who else wants to print some out and just spend an afternoon practicing?

More Mary Oliver, because she is great and because we’ve had the windows open at night and I can hear the birds in the morning. Summer Of Basics: Why NOT Plan More Projects?

It’s time to squeeze more projects into the planned year with the “Summer of Basics” again. Yes, I bought more fabric for it, but two out of the three really will fill a (small) wardrobe gap: Wide summer pants to wear when working from home. Then I threw another shirt into the mix because why not?! From bottom to top, there’s a gray bamboo knit from The Fabric Fairy that will become Greenstyle Warrior Pants (probably without the side slit, but we’ll see if I want the extra ventilation). I’m living dangerously and not making a muslin because the Greenstyle patterns have fit me so well.

I just want to take a solid week off and alternate between sewing and reading in the sun. Anyone with me?

This is the kind of story that would have made me roll my eyes SO HARD before I started going to the gym, but my Sunday morning workouts have included Bulgarian split squats for the last few weeks and they make my quads hurt so much that hiking anything steep that same day is right out (I made Doc turn around last week!).

So instead, we went to Red Butte Garden to look at the roses in bloom: 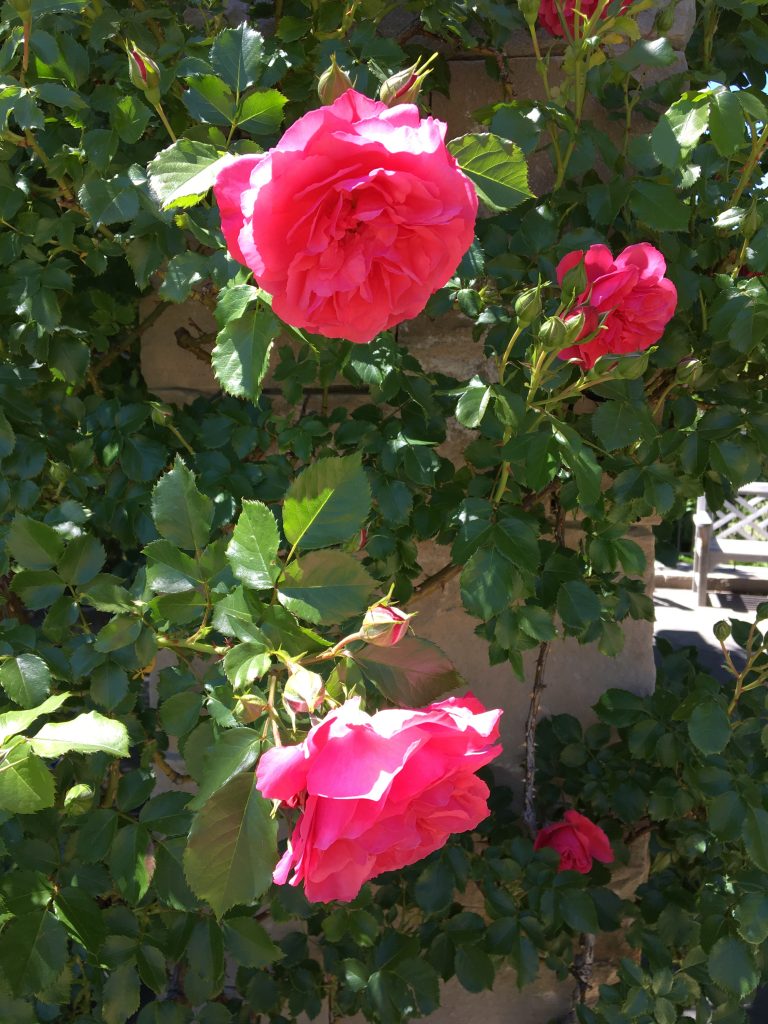 1. The Twitter account that talks about tailoring (I linked to them before) did a long thread about the really egregious choices of Trump and his mob at the state dinner in London.

2. Kimberly Harrington again: Answers to “Is Your Dog Friendly?” Applied to Me

3. Yes, I found this on Instagram, but I really like the philosophy. Which is why I follow only my best friends, sewing accounts, goat accounts, inspirational saying accounts, and cartoons at this point: Books In Your Pocket

I only learned about the Libby app a few months ago but it’s one of the best things ever: You can check out ebooks from your local library and read them on your phone (or Kindle, I think).

Since I downloaded it, I’ve read more books in a few months than I think I read all last year–the screenhot below is from my sci-fi kick of the spring. (I’ve moved on to Chief Inspector Gamache novels now, but highly recommend the Martha Wells and Ann Leckie series if you want some space reads.) Since Libby connects to your local library, it doesn’t have everything and sometimes there’s a long wait, but it’s a great thing to do instead of scrolling Instagram. And it’s free!

I saw this doctoral project by Leah Branstetter linked on Twitter yesterday and it’s fantastic–a digital dissertation with biographies, playlists, and a whole bunch of info disproving the idea that the pioneers of rock and roll were all men.

All of Branstetter’s research is fascinating–I had no idea about answer songs or that there was a  “female Elvis Presley,” Alis Lesley:

Lesley usually performed barefoot, claiming shoes made her feel inhibited. An account of one of her shows reports that, clad in yellow satin pants, Lesley “stood on the piano, lay on the floor, wrestled with the microphone, embraced the string bass—and sang.” Another noted that “using guitar and movable anatomy … she makes ‘Elvis The Pelvis’ look like an elderly, arthritic Salvation Army drummer.”

The playlists are a fantastic addition, too, so you don’t have to click back and forth to YouTube as you read. Check it out: Women In Rock and Roll’s First Wave.

I Did A Thing!

Back at the beginning of 2018 I made some undies for myself and was (rightly) very excited about them. I never talked about it here, but by February of 2018 I had a business license, a Big Cartel account, and an idea to make undies for sale.

Then, of course, Mom got sick, I stalled out a little on getting my tester pairs made, and before I knew it a year had passed. Then Mom passed, and we had to figure out how to go on without her–but I renewed my business license anyway and finally, in the last couple of months, I’ve put the site together.

They’re something I’m calling “Open Source Undies” (since I didn’t draft the pattern or design the fabrics) and honestly, I’ve never had as much fun writing anything as I did writing the product descriptions for these.

I’m not sure the business will go anywhere but it feels really good to finally have this out in the world. Check it out! Hold On To Your Butts: Handmade Undies The clouds we’ve had for the last month finally seem to be clearing and summer is here! Honestly, I haven’t minded the rain since the hillsides are so green–but it will also be nice to get the patio set up and have ice cream outside after dinner.

(Photos from The Terraces area of Millcreek, complete with a wild clematis.)